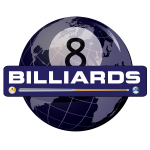 Object Of The Game

Ten-ball (10-ball) is played with ten object balls numbered one through ten and the cue ball. The balls are played in ascending numerical order and the lowest numbered ball still on the table must be contacted by the cue ball in order to establish a legal hit. The first shooter to pocket the 10-ball on a legal shot (including the break) is considered the winner of the rack. Only one ball may be called on each shot, except on the break shot where no ball may be called.

The object balls (1-ball through 10-ball) are to be racked as tightly as possible in a triangular shape, with the 1-ball at the apex of the triangle and on the foot spot, the 10-ball in the middle of the triangle. All other balls should be placed in random order. The base of the rack should be parallel to the foot cushion.

Note:The condition of the felt often makes it impossible to perfectly satisfy the rules above. In this case, accept the best rack possible. The breaker’s opponent normally racks the balls, but the opponent may designate anyone they wish to rack as long as it is not themselves. IBA leagues are not “a rack your own” league. Players must rack for their opponents.

Note: In the event a shooter places the base of the cue ball over the head string the opposing shooter must call it before the break shot is made, not after. If the shooter performing the break shot, during their stroke, completely misses and makes no contact with the cue-ball (basically a "swing and a miss"), this is not considered a foul and the shooter may try the break shot again.

If the shooter performing the break shot, during their stroke, completely misses and makes no contact with the cue-ball (basically a "swing and a miss"), this is not considered a foul and the shooter may try the break shot again.

If the breaker pockets one or more balls on a legal break, they continue to shoot in rotation until they miss, foul, or win the game. If the shooter misses or fouls, the other shooter begins their turn at the table and shoots in rotation until missing, committing a foul, or winning. The game ends when the 10-ball is pocketed on a legal shot, or the game is forfeited for an infraction of the rules.

PUSH OUT - The shooter, who shoots the shot immediately after a legal break, may play a push out in an attempt to move the cue ball into a better position for the option that follows. On a push out, the cue ball is not required to contact any object ball nor any cushion, however, all other foul rules still apply. The shooter must announce his intention of playing a push out before the shot, or the shot is considered to be a normal shot. Any ball pocketed on a push out does not count and remains pocketed except for the 10-ball. Following a legal push out, the incoming shooter is permitted to shoot from that position or return the shot to the shooter that pushed out. A push out is not considered to be a foul as long as no other rule is violated. An illegal push out is penalized according to the type of foul committed. After a shooter scratches on the break shot, the incoming shooter cannot play a push out.

Note: Should the shooter who is playing the push out pocket the 10-ball, the 10-ball is to be spotted, the cue ball remains in the current position on the table, and the incoming shooter is permitted to shoot from that position or return the shot to the shooter that pushed out.

Shooters are required to call their intended ball and pocket when shooting on every shot with the exception of the break. Calling a pocket is done by either verbally announcing the designated pocket to the opponent or any shooter on the opposing team or by pointing at the pocket with your hand or pool cue. The shooter does not need to call number of cushions, banks, kisses, or caroms. If the shooter pockets the 10-ball in the designated pocket, the game is a win.

If you illegally pocket any ball, your opponent has the option to:

Race To Games – Game winner receives 15 points for legally pocketing the 10-ball and the opposing player receives 0 points for the loss.

Note: Neither player has earned any points for a game until that game ends.

The game ends at the end of a legal shot which pockets the 10-ball, or when a shooter forfeits the game as the result of a foul.

International Billiards Association also known as IBA has been in the business of managing pool/billiards leagues since 2005 when it merged with M8 Pool Leagues. M8 has been in business since 1989 and is one of the largest independent leagues in the country. M8 had its own proprietary pool/billiards handicapping system now known as TruSpot™. With millions of sets played in its 32+ year histroy, TruSpot™ has long been touted as the most accurate pool/billiards handicapping system in the business.